Nancy thought it would be a good idea to take some pictures of Oshie in the different hats that he has. They could have been executed a bit better on my part but hey, dogs are like small children and they don’t like to cooperate for very long. With the help of a few treats we were able to get Oshie to sit still long enough to get through two different hats. He only has three and the third is a Santa hat so it is OK that we didn’t get them all.

The first hat was a Los Angeles Dodgers baseball cap that is too small for Oshie. Naturally being a native Angelino Nancy had to throw her Dodgers Jersey on him too. All was going well until he got bored with having his picture taken and decided to try rolling around in the grass in the perfect white Dodgers jersey ha-ha. See a few of the photos below. 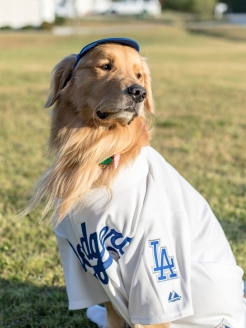 The next ensemble that Oshie wore was a propeller hat with his bandanna. Right after Nancy secured the hat to Oshie’s head the wind began to blow and the propeller was spinning. Unfortunately I didn’t get any video or photos of that. Sorry. He didn’t seem to mind this hat as much as the baseball cap and this is probably because it only has a strap that goes under his chin vs. holes that his ears have to go through. Also the neighbor was walking their dog and Oshie was intently watching and waiting for them to get closer. As soon as they were in range he went charging over with the hat still on. It was pretty funny to watch. With that,the photo shoot was over. Here are some of the shots with the propeller hat. 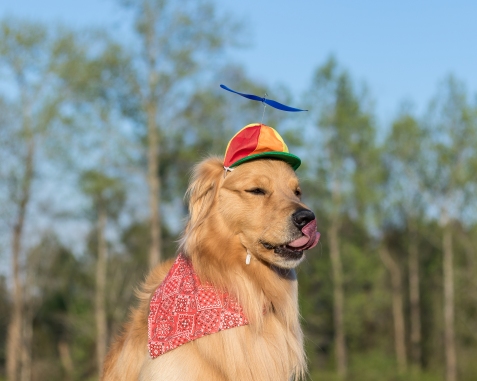 The photos didn’t come out as great as I would have liked but they are pretty funny. Next time maybe we will do a little more preparation to ensure the best hat photo shoot possible ha-ha. Hope you enjoy and thanks for stopping by.

Oh and here is a short video. Sorry for the abrupt end. I am not much of a videographer.