Hello to anyone still watching our blog. We know it has been eons

since we last posted. Keeping up with Instagram, YouTube and Nancy’s deployment has kept us busy. If you follow our other social media you will be up to date on our goings on.

Oshie is happy and healthy and as sweet as ever. He also has new Merch for sale which can be found here

Over past merch campaings we have raised almost $9000 for animal rescues. If the new merc does well we plan to make regular releases of new designs and continue to raise money for rescue organizations.

So get some Life’s Golden merch while you can and stay tuned because we plan to begin posting more regularly to the blog again soon!

Last Saturday we took Oshie in for one of his bi-annual checkups. We generally don’t have any concerns and have been fortunate to have such a healthy pup.

He went through the gamut of vaccinations and blood drawings and we also had a small bump under his skin checked (too small to cut off and test so we are keeping an eye on it). We also asked the vet about his panting which he seems to do often. She said it could be related to a thyroid issue and they could run a test for us.

Of course we had that done and we received good news. Everything is normal on the thyroid front and Oshie just gets excited and hot easily (he does have a thick coat lol).

So we left the Vets office with an almost clean bill of health, Oshie is up a few pounds from his last visit so we need to cut back on his food. He also got some pretty purple bandages where they drew blood ha ha ha!

Happy even with purple bracelets. 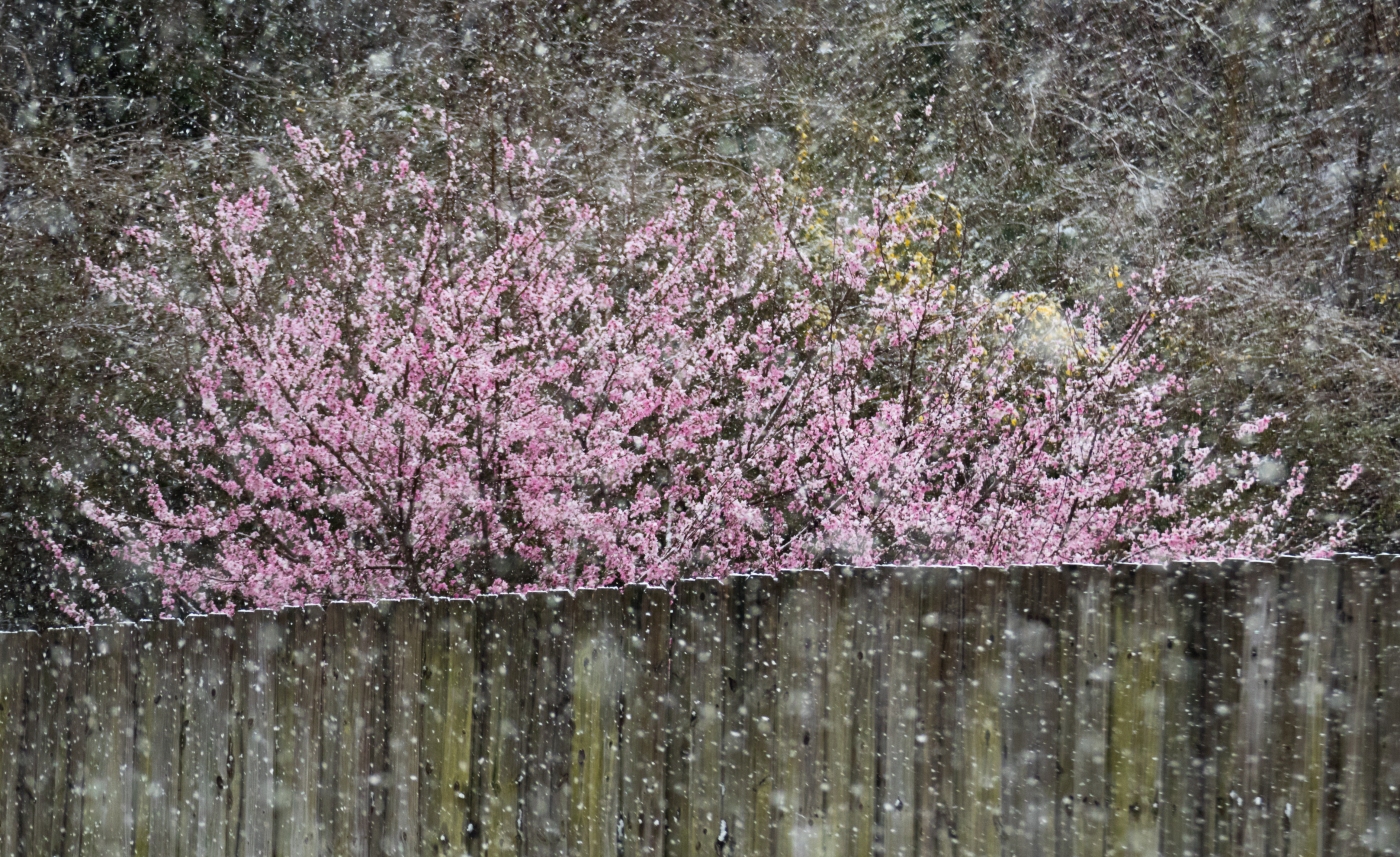 The past couple of weeks here in North Carolina have been pretty warm. Temperatures have regularly been in the 60’s and 70’s with a few cold days mixed in. The weather has been so nice that the trees have decided it was time to start blooming (featured image is the neighbors peach tree in full bloom). We were beginning to think we weren’t going to see any snow for the second year in a row. So you can imagine how shocked we were to wake up to snow falling on Sunday morning!

When Oshie finally managed to get us up, (we thought he let us sleep in for once but forgot about the time change) we opened the blinds to find big white flakes falling from the sky. Oshie had never really seen snow before Sunday. The first year we had him we woke up one morning to the yard covered in frozen rain/ice and that was the extent of his experience with wintry weather. I quickly grabbed the camera and let Oshie loose to experience his first snow.

He had an absolute blast! He was a little confused when it started to stick to his tennis balls (it was a very wet snow) but overall I think he really enjoyed it. Proof is in the pictures below!

Unfortunately the snow only lasted for an hour or two and by mid morning there was no evidence that the snow had even come. It would have been nice if it had stuck around for another day or two, although to be honest I am happy it wasn’t a major storm. The good folks of North Carolina have no idea how to handle snow. At least Oshie has finally experienced the white stuff, even if it was just for a short time.

Here is short video of Oshie enjoying the snow!

North Carolina winters can be pretty wild. One day it will be in teens all day and threatening to snow and the next day it will feel like summer. Then there are the days where the temperature starts off as freezing and by the afternoon it is in the 60’s and 70’s. I love a mild winter as much as the next person but the huge swings in temperature from day to day (and even in the same day) are really annoying.

Enough complaining. Yesterday we saw temps in the high 70’s and low 80’s. The sun was shining and it was gorgeous outside. It almost felt like a summer day. So we decided to enjoy the weather and sit outside with Oshie. We even had some Watermelon to help complete the dreams of summer. I think Oshie knew that we were going to give him some because he was whining before we even had a chance to set the plate on the table and sit down. So you guessed it…here comes another video of Oshie.  Below is a short video of Oshie scarfing down two pieces of Watermelon while wearing his goofy propeller hat. Prepare yourself for the cuteness. As always enjoy and thanks for stopping by.

Does Your Dog Take Medication?

How many of you fellow dog owners have to give your furry friend medication in pill form each month? Do you experience difficulty in getting your dog to actually swallow the pill and if so how do you trick your canine friend into swallowing the medicine?

In our case Oshie has to take one pill every month that covers heart-worm, flea and ticks (I think). The pill is supposedly beef flavored or scented however Oshie hates it. As soon as you try to give it to him he is running for cover. We have tried smothering it in peanut butter, wrapping it in cold cuts or cheese and breaking it into tiny pieces and mixing it in with his food. Not a single one of these methods has worked without fail. We have had the most success with hiding it in some kind of treat like the cold cuts or cheese but it still takes a while to get him to actually eat it. Check out this short video of the process.

Sometimes I think he refuses to eat the pill on purpose because he knows he will keep getting treats.

If you have trouble getting your dog to take their medication check out the comments on the video. There are some great suggestions posted by people who have viewed the video and experienced the same troubles.

Please don’t hesitate to comment on the video if you have a method that has worked well for you! Have a great weekend!